Bollywood is known for its glamour, glam, and ability to establish trends. As a result, it’s only reasonable to believe that celebrities drive the business. Stardom is a natural phenomenon. Bollywood celebrities have the most incredible fan base in India. Most Popular Bollywood Actor is always in the news everything they do or say is discussed, no matter how large or tiny.

Indians enjoy being amused, and watching movies is by far the most popular form of entertainment. People acquire an interest in their stars as they watch them on film repeatedly. They develop a bond with the artist that lasts long after watching the film. Thus we have brought you the list of the top 10 Bollywood actors. 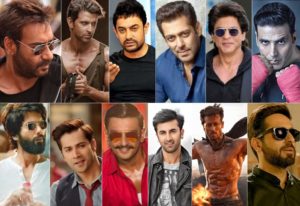 On November 2, 1965, in New Delhi, India, Shah Rukh Khan was born. “King Khan“, “Badshah of Bollywood,” “King of Bollywood,” and many more names have been given to him by his adoring fans. Shah Rukh Khan has made a reputation for himself by portraying exceptional love parts in various films, and he’s also done comedic and family drama parts. With 14 Filmfare honours, he is the best actor in India.

Not only in India but also worldwide, he has a big fan base. In terms of global appeal, no Bollywood actor can match him. Shah Rukh presently makes more than Tom Cruise and Johnny Depp and is only second to Jerry Seinfeld, the stand-up comedian icon. After Dilwale Dulhania, Le Jayenge began his open road to become a megastar. The film has a cult appeal, and a matinée screening is still held at Mumbai’s Maratha Mandir.

Salman Khan was born on December 27, 1965. He is a producer, media personality, singer, philanthropist and actor. Salman is known to his admirers as “Sallu Bhai” and “Bhaijaan.” He has received several accolades throughout his movie career, and he is currently one of the most successful Bollywood actors.

The actor made his acting debut in 1988 in ‘Biwi Ho To Aisi,’ in which he played a supporting role. He has made every effort to provide his fans and country with the finest films possible from then till now. He’s played various characters, including comedic, romantic, and even dramatic parts. Making him the most popular Bollywood actor.

Amitabh Harivansh Rai Bachchan was born in Allahabad, United Provinces, during the British administration on October 11, 1942. He is a producer, singer, television presenter and the finest Bollywood actor. Zanjeer and Deewar, his first two films, were blockbusters in the early 1970s. He is known as the “Angry Young Man” in the Indian film industry. Even Bollywood’s “Shahensha” has referred to him. There are over more than 150 awards he has got for his efforts on these films.

Mohammed Aamir Hussain Khan is Bollywood’s most well-known and accomplished performer On March 14, 1965, he was born in Mumbai, India. He is a brilliant Bollywood actor and a producer and director. “Perfectionist” is how he has been referred to for his work in Hindi films. He has also received several honours, including the Filmfare and Padma Shri awards, and Padma Bhushan was bestowed upon him in 2010.

Actor Akshay Kumar was born in Amritsar, Punjab, India on September 9, 1967, to Rajiv Hari Om Bhatia and Shweta Bhatia. He is an Indian-Canadian actor, producer, and martial artist who has appeared in more than 100 films.

On January 17, 2001, he married Twinkle Khanna. He can play every sort of character, including romance, comedic, humorous roles, and supporting ones. From 2011 until the present, he has given our Indian cinema a new image by delivering back-to-back successes.

Hrithik Roshan is another deserved name on our list of the top 10 most popular Bollywood actors in 2021. Duggu aka Hrithik Roshan Was born on 10 January 1974. One of the world’s most handsome guys in Bollywood, he won six Filmfare Awards.

After appearing in multiple films as a child actor, Roshan made his feature debut in the 1980s with a big role in his father Rakesh Roshan’s film “Kaho Naa… Pyaar Hai”. After this film, he worked with many other films in various categories.

Also Read, Who is the best Punjabi Singer ?

Ranbir Kapoor, a famous name from the Kapoor family, is the industry’s youngest actor. He was born in Mumbai, India, on September 28, 1982. An actor’s grandson and the son of a well-known Bollywood actor, Raj Kapoor.

Deepika Padukone’s career has taken off since her debut, yet she has maintained her modest demeanour throughout. The actress has been working in the profession for more than a decade. However, since her debut in Om Shanti Om, she has been a fan favourite. If someone wants to learn how to crack the Bollywood code, Deepika Padukone’s acting career is an excellent example. Her every performance has been more significant than the last, and with Padmaavat, she’s raised the bar even higher.

In Yash Chopra’s 1993 drama ‘Parampara,’ he made his debut in the Indian film industry. When he initially started out, he didn’t consider himself a success. Nevertheless, his roles in the romantic drama “Yeh Dillagi” and the action film “Main Khiladi Tu Anari” helped him gain recognition over time. A few of his roles were comedy-drama, such as in “Dil Chahta Hai” and “Kal Ho Na Ho.”

Ranveer Singh is another well-known Bollywood actor. He made his acting debut in the 2010 film ‘Band Baja Baaraat,’ which he later went on to star in. This Indian film star was born on July 6, 1985, in Mumbai. Filmfare awarded him Best Male Debut for his debut film. Ranveer Singh is quite young & enthusiastic and is one of the top 10 actors of Bollywood.

This is the list of the top 10 most popular actors in Bollywood. If you want to add some more names, comment below. Keep visiting Issaindia.in. Thank you.