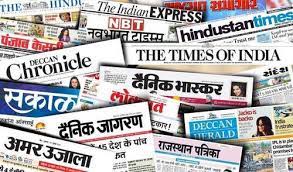 The Hindu is the most widely read headline English newspaper in the southern Indian states of Andhra Pradesh, Tamil Nadu, Kerala, Telangana, and Karnataka. Suppose you are interested in current political developments in our nation and the rest of the globe. The Hindu newspaper covers all of this in great detail. The newspaper began as a weekly in September 1978 and subsequently evolved into a daily broadsheet. As a result, the Hindu is one of India’s most significant English-language newspapers. Since December 2009, it has had a total circulation of 1.4 million copies, according to verified numbers released by the Audit Bureau of Circulations. In 2010, the firm had a gross income of $40 million and employed over 1,600 people.

Hindustan Times, sometimes known as HT, is the most widely read newspaper in India published in English. The newspaper history of India is closely related to the country’s independence movement. Sunder Singh Lyallpuri released it in 1924 in support of India’s independence movement from British colonialism. It is worth noting that Sunder Singh was the originator of the Akali movement in India. From New Delhi, the daily expanded to Ranchi, Kolkata, Lucknow, Patna, Mumbai, and Chandigarh before ending up in other regions of India. HT media owns the publication, which has a daily readership of more than a million. Many additional periodicals, such as the Nandan, Mint, and Kadambani are part of the newspaper.

The Statesman’s Delhi edition began publication in 1931. The Statesman Weekly is a compilation of information and perspectives from the Kolkata and Delhi editions. It is prevalent with subscribers outside of India, printed on airmail paper. This company started publishing in Kolkata and expanded to Siliguri, Delhi, and Bhuvaneshwar. The Statesman is one of India’s most revered newspapers, with a daily readership of over 200,000 copies. Foreign media regularly quote its news.

Because of its distinctive and largely unbiased news coverage, The Telegraph ranks among India’s top ten English publications. The publication is well-known, particularly in the eastern regions. The newspaper is owned by ABP Private Limited, which began publishing in Kolkata in 1982. After only a few years, the journal had garnered enough clout to become the most widely read English daily in the eastern area, with its headquarters in Kolkata. The design director of London’s The Sunday Times, Edwin Taylor, established a standard for the newspaper to control mediocrity and bad performance.

It is the country’s second-oldest English-language newspaper. Delhi, Lucknow, Bhubaneswar, Dehradun, Kochi, Bhopal, and Chandigarh are among the daily is printed. George Allen created the Pioneer in 1865. He’s been in the tea industry in northeast India for quite some time.

Mr. Chandan Mitra, the newspaper’s owner, and principal editor is also a Rajya Sabha member from Madhya Pradesh. The main daily focuses on the rise of pro-rights groups among the urban middle class. Alfred Sinnett was the editor of the publication in 1872. He led the newspaper’s metamorphosis into one with significant impact in British India, while later noted for his interest in theosophy.

The Diligent Media Corporation owns the publication. The Daily News and Analysis is a tabloid published in India. Mumba’s Daily News And Analysis began on July 30, 2005. It is considered one of India’s top English-language daily newspapers. The publication is owned by Diligent Media Corporation, a subsidiary of the Essel Group. The newspaper offers readers a composite fair view of the city, the country, and the globe through information, perspectives, investigations, and interaction.

The Asian Age is India’s sole newspaper English daily with an overseas edition. It was founded in February 1994 by MJ Akbar, a well-known Indian politician and the current Minister of State for External Affairs. Deccan Chronicle Holdings Ltd, which also owns the namesake Hyderabad-based daily noted above, has acquired Asian Age throughout the years.

Asian Age also has offices in New Delhi, Mumbai, and Kolkata. Although Asian Age’s circulation data are unclear, its website boasts that it reaches over a million readers every day, together with Deccan Chronicle. Asian Age has editorial cooperation with the New York Times, one of the most prestigious English newspapers in the world.